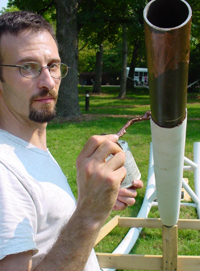 Eric Troffkin is a Detroit based sculptor working across a range of three-dimensional media, including fabricated steel, cast plastics and cast metals. With a focus on the production of multiples and modules, he designs “component systems” of parts that are assembled on site. His works are responsive to architecture and landscape, equally industrial and organic, and have been installed nationally from New England to Florida and west into Texas and Missouri.

About his artwork, Eric writes, “I begin my artwork in the studio through the design and production of sets of interlocking modular parts and multiples. In the studio my concern is for the physical functionality of my objects. Beyond the studio my deeper goal is the discovery of unexpected possibility in assembly and combination – how will my objects combine and “grow” on site? Through my objects and creative process I draw a connection between wildness and our own creative/productive industriousness, asking: do our activities follow natural patterns? or themselves exhibit forms of wildness?